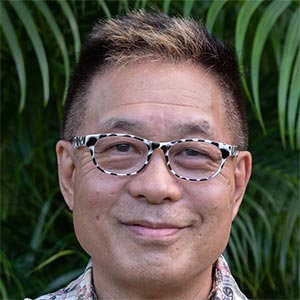 Alan Akaka received his BEd in music and MEd in administration. Alan enjoys a successful career in music and education with a long stint at the Halekulani, Waikiki Beach Marriott Resort and Spa, and Duke's Waikiki. He taught at Kahuku High & Intermediate and University Lab School. At Kamehameha Schools he directed the Performing Arts Academy and established the Na ‘Opio Singers and Ensemble program at the middle school level.

He was a speaker on music and education for the Hawaii Music Educators Association, the Hawaii Association of Teachers of Japanese, and the Hawaiian Steel Guitar Association. Alan was featured in the Chicago Tribune, the Los Angeles Times, the Honolulu Advertiser, the Star Bulletin, TGIF and on the front covers of the Mid-Week, the Hawai‘i Magazine and the AAA Westways. He was invited to do a performance for President Clinton in Washington D.C. and returned later as a featured soloist at the Kennedy Center. In 2009, he emceed and performed at the Hawai‘i State Society's Presidential Inaugural Ball in Washington D.C.

Alan is the chairman of Hawaii Institute for Music Enrichment and Learning Experiences (HIMELE) which produces steel guitar festivals throughout the state and also serves as chairman for the Advisory Board of the Hawaiian Music Hall of Fame.