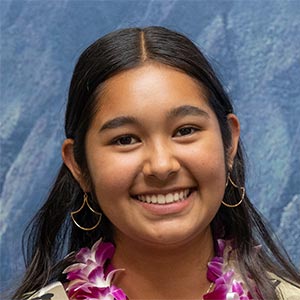 Isabella is a multi-talented musician. She played the trumpet and trombone in middle school and studied the ‘ukulele as a student of Ke Kula Mele for four years.

At one of Ke Kula Mele's concerts, she saw other NextGen students perform on the Hawaiian steel guitar. In her eyes, it was great to see young girls around her age playing the steel guitar.

A few weeks after that concert, Kumu Alan Akaka announced that he was looking for new students who were interested in learning the Hawaiian steel guitar. That's when Isabella knew the opportunity was open to everyone, including herself, and she began studying the steel guitar under Kumu Alan's guidance.

Isabella's influences are Mālie Lyman, Joey and Tai Misailidis, and all of the NexGen steel guitarists. She also listens to Aunty Genoa Keawe and music and performances of her Kumu Alan Akaka. On occasion she also likes to play the ‘ukulele.